Qinghai-Tibet Plateau is the largest plateau in China and the highest plateau in the world, thus it is called “the roof of the world” and “the third pole of the globe”. Stretching around 1,000 km from north to south and 2,500 km from east to west, the total area of Qinghai-Tibet Plateau is around 2.5 million square kilometers, which accounts for over one-fourth of China’s total land area and covers not only area of China, but also parts of Nepal and Kashmir. Most of the plateau lies at an altitude of more than 4,000 meters above sea level. With the highest mountain — Mt. Everest (8844.43 kilometers), and the world’s highest pass—the Dolma-la (5630 kilometers), situating on the area, average altitude of Qinghai-Tibet Plateau is more than 4,500 kilometers.

Tibet, an autonomous region of China, is located on Qinghai-Tibet Plateau. It covers an area of more than 1.2 million square kilometers, accounting for one-eighth of the China’s total and ranking the second largest provincial region in China (only after the Xinjiang Uygur Autonomous Region). Domestically speaking, Tibet is adjacent to Xinjiang Uygur autonomous Region and Qinghai Province on the north, Sichuan Province on the east, and Yunnan Province on the southeast. Externally speaking, Tibet is an important gateway of China, bordering countries and regions such as Burma, India, Bhutan, Nepal, and Kashmir and stretching a land boundary line of around 4,000 kilometers. In spite of the complex topography, terrain in Tibet can generally be divided into three major parts, namely the forest region in the east, the grassland region in the north, and the agricultural region in the middle and south.

Climates in Different Regions of Tibet

Tibet is the place which receives the strongest solar radiation as well as the longest sunlight hours (3100-3400 hours a year). However, because of the high altitude, yearly average temperature in Tibet is lower than most regions of China. For example, yearly average temperatures of Lhasa and Shigatse are 10 to 15 degrees lower than those of Chongqing, Wuhan, and Shanghai. Because of the complex topography, climates in different regions of Tibet are greatly different from each other, including differences of rainfall, humidity, and temperature.

Generally speaking, major features of climate in Tiber are: dry and cold in the northwest, and warm and humid in the southeast. Therefore, climate types also change in a northwest-southeast direction. From northwest to southeast, climate types include: frigid zone climate, temperate zone climate, subtropics climate, and tropical climate.

As for Changthang region, the third least populated region of the world (only after the northern Greenland and Antarctica), is in the far northwest of Tibet and located at an average altitude of around 5,000 meters. Climate here is the most unique in the world, with different parts featuring totally different climates. In spite of the huge difference, climates in those areas still have one thing in common: the temperature in winter can be as low as -40°C.

Central and other parts of Tibet

Under the influences of the westerly wind in winter and the southwest monsoon in summer, climate of Tibet can be divided into dry season (October to the next April) and rainy season (May to September). However, rainfall in Tibet is not fairly well-distributed. From the perspective of location, rainy seasons are more common in southeastern region than northwestern region. When yearly rainfall in southeastern areas reaches up to 5,000 mm, the amount of that in northwestern areas is only 50 mm.

Because of the barren land of Tibet, only 2% of the terrain in Tibet is arable. Therefore, Tibetan farmers mainly make their living by raising livestock, with yaks, sheep, and goats being the major types of livestock. The farmers are nomadic people, as they won’t keep their livestock in confirmed corrals. On the contrary, they will move from place to place several times a year in accordance to the situation of the pastures which provide forage grass for their livestock. If they always stay on only one pasture, the environment of it will be seriously destroyed and the grass will be depleted, both of which need long time for recovering. So they need to change places for pasturing every few months. That’s the reason why the nomadic people can be self-sufficient all the time.

Compared with people of other places, you might think that Tibetan nomadic people dirty and poor. Why do the nomadic people look dirty? One reason is that because of the low temperature at nights, they always wear clothes made of animals’ fur. And they don’t wash the clothes often. The other reason is that they need to stay outside for pasturing throughout the year, so their clothes can be easily covered with dust. In spite of that, the nomadic people are not as poor as many people think. Even one single yak can cost as much as 5,000 yuan. What’s more, there is not only one yak in each nomadic family, but dozens or even hundreds of yaks! So they are much richer than you think.

Just as mentioned before, only 2% of the lands in Tibet are arable, yet they have played important role in feeding the population there. Because of the high altitude and complicated environment, the arable lands is fragile and can be easily influenced. Farmers have invented methods that can make full use of the lands—crop rotation, mixing crops and fallow periods, which have prevented depletion of the soil to a large extent. In the past 3,600 years, highland barley has been the major crop in Tibet, which can be processed into staple food such as tsampa. Other crops like rice, maize, millet, wheat and rapeseed were introduced into Tibet, together with vegetables such as cabbage, turnip, radish, potato, peas, beans and tomatoes, which were only be enjoyed by rich families in the past, as the freights of these crops and vegetables were rather high during that period.

Fallow period refers to the season when nothing is planted in arable land, so quality of the soils can get a chance to be improved. After the fallow period, Tibetans begin their first round of cultivation in spring (mainly during the period from mid-March to early April). Before actual practice of planting crops, a ceremony would be held to represent people’s wishes for a bumper harvest. There are mainly two ceremonies of such kind in Tibet, which are called Nyatro and Ongkor respectively. Nyatro is the first ceremony of the year to celebrate a new round of cultivation, and it usually takes place in April. Ongkor usually takes place in mid-June, when there is enough rainfall for irrigation.

When Nyatro comes, Tibetans will put on their newly traditional clothes, with hada (a piece of silk used as a greeting gift) in hands. They will gather on the first cultivated land of their own villages. When the ceremony begins, the first thing to do is to sprinkle a cup of barley wine onto the land. And then men will plough the first cultivated land and women will spread the first seed in the soil, with the wish for a bumper harvest and good weather in the coming year.

Irrigation systems in Tibet are not well-developed. Therefore, rainfall in mid-June is of great importance to the growth of the crops. That’s why the ceremony Ongkor is held during this period. As a matter of fact, Ongkor is not only a ceremony, but also a festival with a history of over 1,500 years in Tibet. In Tibetan language, “Ongkor” means “the days busing on the cultivated lands”. Celebration for Ongkor usually lasts for 3 days. In the morning of the first day, Tibetans leaded by lamas and old framers will circle around the cultivated lands, with ears of wheat in hands. Lamas and old framers will blow horns to express their gratitude to heaven for having brought them a fruitful year. After that, people will gather in squares to take part in all kinds of entertainment activities, such as horse racing, shooting arrows, and tug-of-war, etc. This is also a day when each family needs to prepare sufficient food for relatives and friends. In the evening, young men and women will sing and dance around the bonfire till midnight. It is not only a festival only for local people, those who come from afar can also join with them to celebrate the festival.

After the rainy season, farmers have to wait for around 6 weeks before they harvest the crops. Therefore, they usually begin to harvest their crops from mid-August, and the activity will not be completed until the next month. Harvesting is done manually by cutting stems with short sickles. Except for those wheat and barley for urgent needs, the other wheat and barley will be tied up in bunches and stored in barns.

There are many open-air markets in Lhasa where people can buy all kinds of products for daily use. Most of the markets are located in old town of Lhasa, near the Barkhor Street. Not only local products such as tsampa, fried meats, and churpi (a kind of dried yak cheese or butter), but imported nuts, dried fruits, and spices imported from India are also sold on the markets. Tromsikhang Market is the biggest wholesale market in Lhasa, enjoying a history of over 300 years and selling hundreds of local and imported products. “Tromsikhang” means “market” in Tibetan language, and it is also the name of an ancient building, which was a governmental office in the Qing Dynasty and is now an exhibition hall.

In addition to the processed products, tourists can also find natural local crafts of different kinds in the markets, which are good choices to be a present for friends and relatives. The varieties of goods are just out of tourists’ imagination, including handmade beads, carved turquoise, beeswax, and red corals, etc. Even if for those who don’t want to be bothered by sellers, they can also go to the markets, as the sellers there won’t keep promoting their goods and asking visitors to buy them. Time permitted, tourist must pay a visit to the local farms around Lhasa. The traditional culture of agriculture in the area is so unique that they won’t learn it from other places in the world. Therefore, this would definitely be an unforgettable experience in their life. 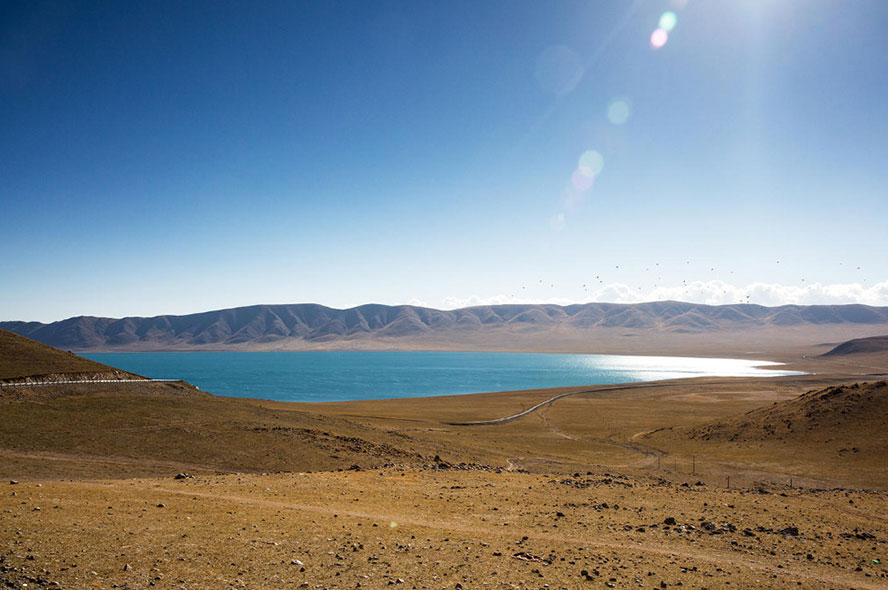 How to Buy Outdoor Products in T... Travel around in Tibet by Bus...