Tibet, the land abounds with mystery and beauty, you can see many interesting things in this wild land. While planning your Tibet tour, you shouldn’t miss the Mount Kailash.

The incredible mountain peak reaches more than 6,600 meters high, and it has never been climbed before. The Mount Kailash is brimming with mystery, religious significance, and deep cultural richness. You can experience the essential components of Tibetan culture and religion, as well as test the limits of your body.

Please check out the top six reasons why you can’t miss the Mount Kailash as below, and here also have some useful tips about when to go and how to take a Mount Kailash tour. 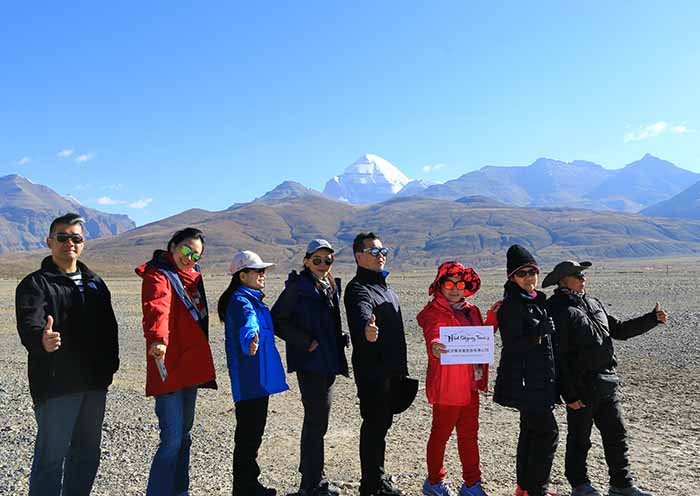 Our customers during a Mount Kailash Tour

1. Mount Kailash Is the Holy Land for Four Religions

Mount Kailash is considered to be sacred in four major religions of Tibet: Bon, Buddhism, Hinduism and Jainism. In ancient books, it is referred to as the center of the world. Every year, numerous devout pilgrims make a pilgrimage to Mount Kailash.

Mount Kailash has long been an object of worship, there are many interesting beliefs about Mount Kailash: In Hinduism, it is traditionally recognized as the throne of Shiva; According to Jain scriptures, Mount Kailash is the spot where Rishavdev attained Nirvana. In addition, Mount Kailash is known as Mount Meru in Buddhist texts. In Tibetan Buddhism, it is hailed as the glorious dwelling of Chakra Samvara Demchog and the great Tibetan yogi, Milarepa.

According to all the four religions, Mount Kailash is recognized as the most sacred mountain, so setting foot on its slopes is a dire sin. It is a popular belief that the stairways on Mount Kailash lead to heaven. Pilgrims of several religions believe that Mount Kailash trek is a holy ritual that will bring good fortune. you will be witness to these deep-seated traditions and religious behaviors of the local people while visiting.

2. It Is a Big Challenge to Take a Mount Kailash Trek

Apart from the spiritual significance, Mount Kailash trek is not an easy job. Although most pilgrims can finish the entire trek around Mount Kailash in a single day, but for common tourists, it would take perhaps 2-4 days to complete the entire trek. With an altitude of about 5000 meters, it’s also difficult for the expert trekkers.

It’s very important to beware of altitude sickness, altitude sickness can weaken the trekker's physical strength, making it difficult to move forward. The best way to defeat altitude sickness is to drink plenty of water and give yourself some time to get used to it. In another words, don’t go trekking as soon as you get to Tibet.

Experienced trekkers are able to cope with the Mount Kailash trek (There will still be some difficulties, though). For those who want to test their limits of physical endurance, the challenges of the trek make it a fantastic experience. You will travel through plateaus, valleys and sacred lakes. There is no doubt that this will be a special trekking experience. 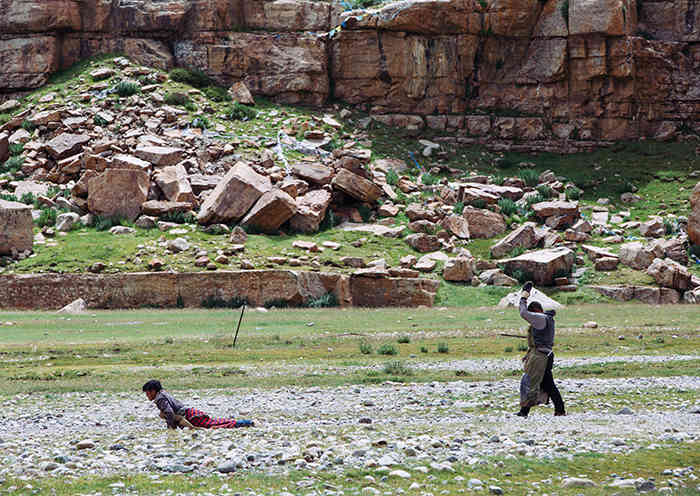 3. Talk to Other Trekkers

Another attractive benefit of Mount Kailash trek is to know about the people come along with you. When you take a rest in the supply points and camping areas, try to get to know others. You will hear the real life and stories of these devout pilgrims by you own ears. Pilgrims are not only from Tibet, many of them are come from India, Japan, and even further. They would like to erase the sins of their lifetime through Mount Kailash trek. You also could meet other trekkers from all over the world, exchange the stories with them would make your journey much more interesting.

Rising up in a pyramid-like shape, Mount Kailash itself is a beautiful testimony of the power of nature. The mountains are almost covered with snow all year around. No matter where you are in this area, the beautiful scenery will always be with you, of course, including this trekking route.

You will pass through barren plateaus, steep and green valleys, and narrow rock passages during the trek. It’s not only a physical challenge, but also an enjoyable journey which provides the unique scenery of the Qinghai-Tibet Plateau.

Lake Manasarovar is the most venerated lake in Tibet, which is located at the foot of Mount Kailash. Because of high mountain terrain the crystal-clear lake is formed, the highest freshwater lake in the world. To really experience the beauty of the lake is to spend the night camping by the lake. The view of the moon rising over the lake is absolutely a priceless gem. 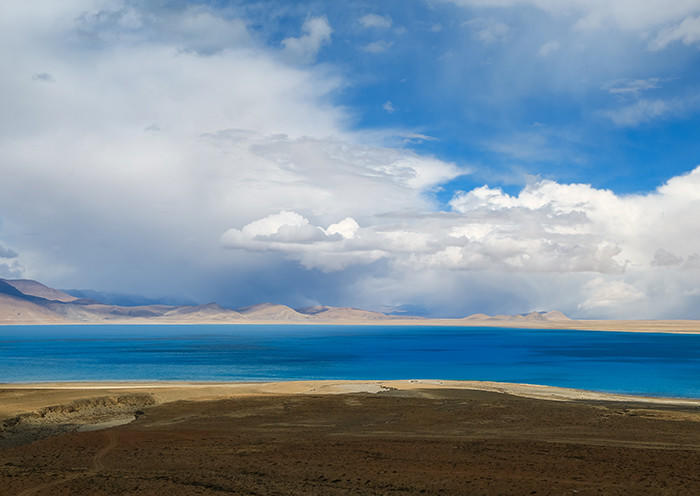 5. Discover the Mystery of Mount Kailash

If you want to find a great mystery, Mount Kailash will satisfy you. This mountain is an ideal destination for the curious people, which is full of historic legends, religious tales, and even modern mysteries. Don’t waste the chance to talk with the devout pilgrims who come there for the religious reasons. You’ll heard stories dating back centuries, and legends of the gods who have claimed this mountain as their own when you with them.

Another mystery about this mountain is no one has ever climbed it, while its altitude is 2,000 meters lower than Everest. This confusing situation has given Mount Kailash a dangerous and mysterious atmosphere. In the other hand, it makes this mountain more attractive.

6. Visit the Monasteries in Mount Kailash

Nyari Monastery is the first monastery on the outer circuit for visitors trekking around Mt.Kailash, is also the most famous one. Nyari Monastery with some mysterious legends has three objects of interest to pilgrims Choku statue, the conch shell and the teapot. the pilgrims feel impelled to stop and see them first-hand.

Some of these monasteries allow pilgrims and tourists to stay inside, moreover, the Drirarpuk Monastery and the Zutulpuk Monastery would provide some basic facilities, even included a simple meal. You can firsthand experience the faith and culture of Tibetans, as the same time, it allows you to experience their hospitality. Remember that priority will be given to devout pilgrims over tourists when space is limited.

When is the Best Time to Visit Mount Kailash?

The rainy season in Tibet is from June to August, and it’s not the best to visit Mount Kailash. There will be cold during November to March, especially at night. I also do not recommend you visit Mount Kailash during this period, because you might be camping outside during the trek.

The best time to Mount Kailash trek is from April to early June or September to early October. In this period，you will enjoy the incredible clear blue sky, crisp air during the day, and the cool nights for sleeping outside.

Another benefit for visiting during this time is the friendly atmosphere. The festival of Saga Dawa occurs on the full-moon day of the fourth Tibetan month. Saga Dawa is a particularly popular time to visit Mount Kailash, there are thousands of devout pilgrims come along with you, it’s a truly unique and unmissable cultural feast.

How to get to Mount Kailash?

If you are planning a Mount Kailash trip this year, you need to start your journey in Lhasa. There are two routes from Lhasa to Mount Kailash, the south route and the north route. We would recommend the south route, which follows the Xinjiang-Tibet highway, and you will see incredible scenery in this route. Due to Mount Kailash is in a remote location the journey may take two days. It is strongly recommended that go there with a travel guide who can take care of your transportation.

There are just a few reasons why you cannot miss Mount Kailash listed in this article. Have you been to this incredible mountain before? Are you planning to go there? Please feel free to let us know! 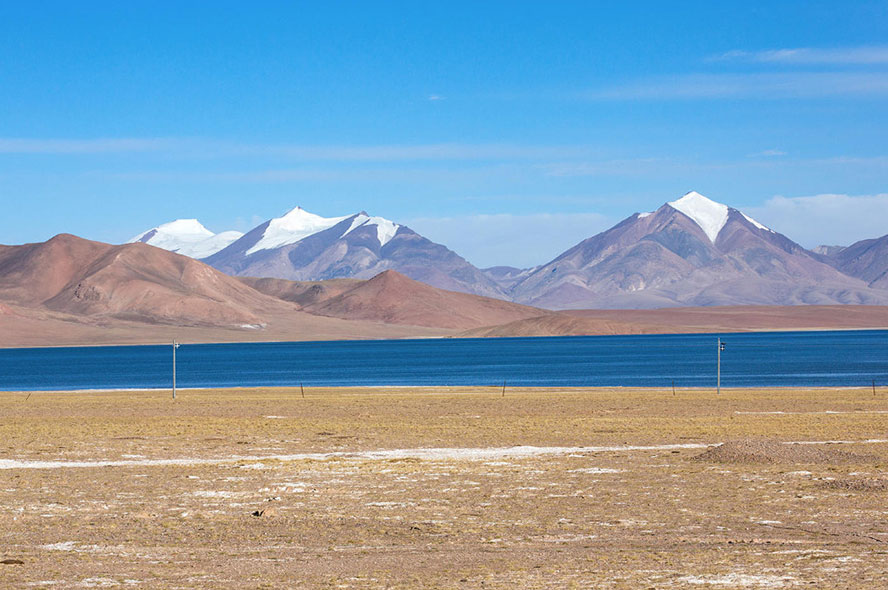 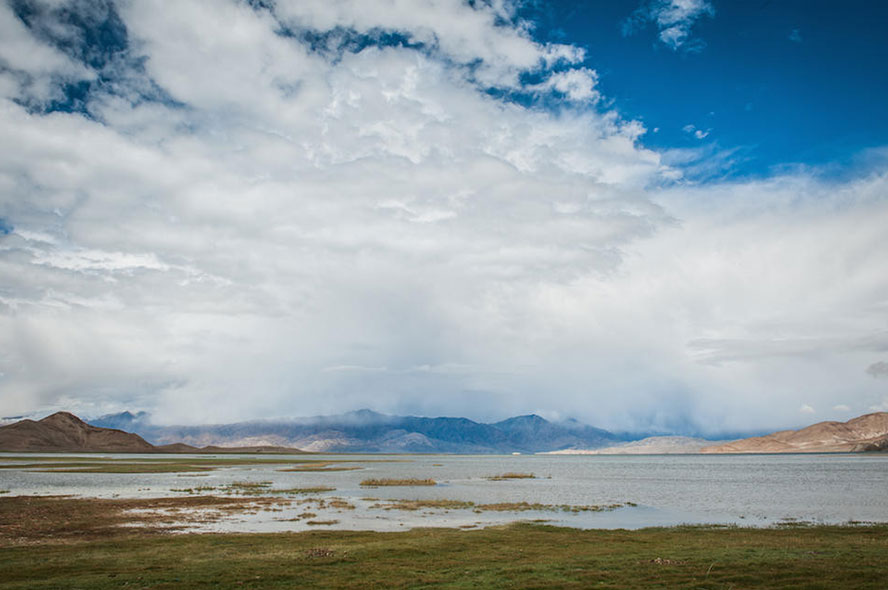 How to Take a Mount Kailash Tour... 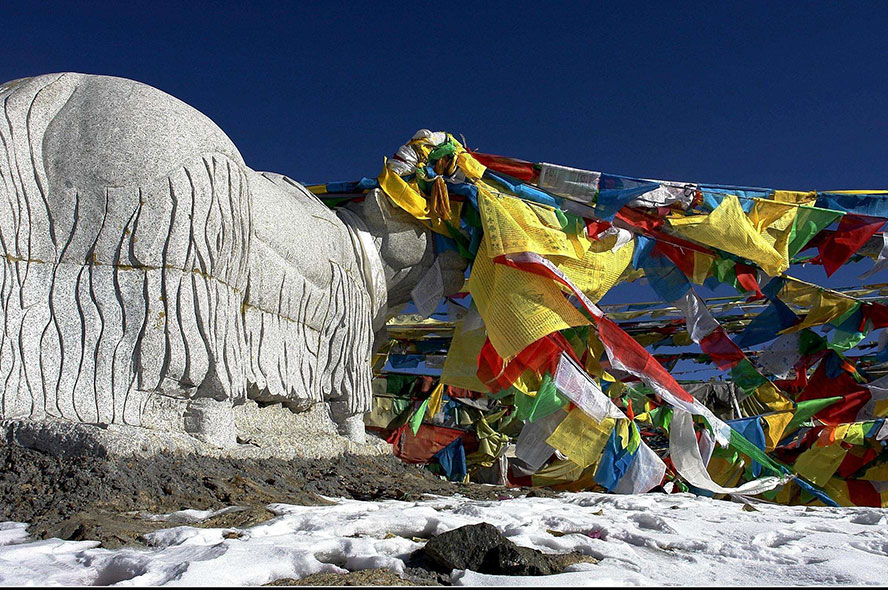