Best Time to Take a Train on Qinghai-Tibet railway

The train from Qinghai to Tibet is not only a transportation mode, but also a very important way to admire scenery. As a sightseeing railway line, the scenery along the way is the most important attraction for the tourists to choose to take the train. Shaking the way to Tibet to appreciate the plateau, white snow mountain and the vast barren wilderness in the train, which amazes you with a completely different landscape. Whenever a different landscape appears, the cheers will be burst out in the train firstly, then the constant shutter sound accompanies as if only the sight view photoed with the camera can be permanent.

How about the landscape along the Qinghai-Tibet railway through out the whole seasons? Which time is the best time for you to appreciate the beautiful scenery in Qinghai-Tibet train? We have a summary as below with regard to the issues concerned by tourists, hope it can help you select the ideal Qinghai-Tibet tourism line and time.

The journey from Xi’ning to Lhasa is the whole Qinghai-Tibet railway. Xi’ning is the provincial city of Qinghai province with altitude of 2300 meters while Lhasa is the provincial city of Tibet with altitude of 3600 meters. From Xi’ning to Lhasa, the train will pass through Qinghai Lake, Tarim Basin, Kunlun Mountains, the Tuotuo River, Cocosiri, Tanggula Mountain Pass, Lake Tsuna, Nagqu grassland, Yangbajing and other scenic spots, with the altitude rises first and then lower down, all the plateau sightseeings are in front of your eyes.

The scenery along the way from start city to Xining

Presently, among the seven start cities of Qinghai-Tibet train lines, except Xining and Lanzhou, the trains start from other cities need to drive a long journey to arrive in Lhasa, passing through many provinces and cities, crossing various topographic and geomorphic areas with changing scenery. (Some comments and experience of taking Qinghai-Tibet train)

On the way from Sichuan and Chongqing to Xi’ning, the train crosses within the Sichuan basin in the pr-stage. The altitude is low, and the sight view is ordinary. Most landscapes outside of the train window are the farmlands in Sichuan Basin, also there are some hilly areas along the way. When crossing Qinling Heights, there are continuous tunnels; after driving out of Qinling to Lanzhou in the northwest, the altitude ascends gradually.

If you want to appreciate the hilly and countryside scenery of Chinese mainland, you can choose the other train to Xi’ning Station for an interchange.

Start from Shanghai - From Jiangnan Water country to Loess Plateau

On the way from Shanghai to Xi’ning, the train passes from east to west through the most prosperous and populated Jiangnan Water country where there are green mountains, pure rivers and lush green trees. It’s not until enter the ancient capital of thirteen dynasties, Xi’an that the vegetation cover becomes less and altitude ascends gradually with fluctuated topography.

Start from Guangzhou - Destined to north from plain to plateau

The scenery of four seasons along the Qinghai-Tibet railway

The scenery of four seasons during the section from Xining to Lhasa is insensitive to the climate change of four seasons, what differentiates the scenery outside of the train window is that whether the snow is less or more.

What differentiates the scenery outside of the plateau is that the color change of vegetation covers and grassland. Where there is trace of Tibetan livings there is development of agriculture and livestock.

The road section from Xi’ning to Golmud is not in high altitude and rich in farmland, especially the canola flowers along the Qinghai Lake which become the most beautiful scenic spot near Qinghai Lake in the summers. The golden yellow color of the canola flower land contrasts with the beautiful blue sky with white clouds and green lakes, the strong color difference pleases your eyes and delights your heart. Yet the bright colors devoid in autumn and winter.

The road section from Nagqu to Lhasa is also the developed agriculture and livestock area which is the famous pastureland of Tibet where it’s full of vigor in summer with lush green grass and flocks of cows and sheep. However; the grassland withers in autumn and winter, ground appears yellowish without the adornment of green color, which adds to the feeling of desolate wilderness.

The road section from start city to Xining is in low altitude, the scenery, especially the trees and farmland differentiates during the four seasons.

In spring, with the renew of ground and rises of temperature, flowers blossom and farmland is ready for renovation for spring ploughing and planting. Passengers can see through the train window the busy scene of plough.

In summer, whatever it is the vegetation cover or the crops in farmland, all are in lush green and the most prosperous during the whole year.

Autumn is the harvest time. People are busy with harvesting the farmland, vegetation cover is also put on a new color.

Which Tibetan trains have the most scenes in daytime?

Which train can we take from Tibet to appreciate more scenery?

It is the ideal option to appreciate the natural scenery along the way in the train back from Tibet, in which way we can not only avoid the high altitude reaction but also the soft sleeper ticket is easy to purchase.（Take the Qinghai-Tibet train on the way to Tibet or back from Tibet）

The road section from Lhasa to Nagqu takes about 4 hours while the railway from Lhasa to Golmud takes about 14 hours. It is advisable for you to take the train starting from Lhasa in the morning back if you want to appreciate the scenery of Cocosiri depopulated zone and see Tibetan antelope.

Among all the Qinghai-Tibet train back from Lhasa, NO. Z6802 train from Lhasa to Xi’ning is the train by which you can best appreciate the scenery. It starts from Lhasa station at 9 o’clock in the morning and takes about 5 hours to arrive in the Cocosiri depopulated zone. You can appreciate the vast snow scenery of plateau.

Check the trains suit you the most again

1. If you want to appreciate the most beautiful plateau scenery on the way to Tibet, it is advisable for you to take the Qinghai-Tibet train starting from Xi’ning station which is more comfortable in journey and takes less time. And the sightseeings on the way is picturesque;

2. If you want to experience the scenery difference between north china and south china, you can choose the train starting from Guangzhou to Lhasa which takes longer way but is available for you to appreciate many traditional Chinese folk house and countryside scenery;

3. If you want to experience Qinghai-Tibet train in busy season, it’s advisable for you to take the train on the way back home. And the earliest train starting from Lhasa can let you appreciate the most beautiful sightseeings;

4. The plateau scenery along the Qinghai-Tibet railway are insensitive to the season change. Yet the natural scenery along the way from start city to Lhasa can differ a lot as the change of four seasons. You can try to take the Qinghai-Tibet train starting from Beijing, Shanghai and Guangzhou if you want to experience the long-distance train journey;

5. Whether you are on the way to Tibet or back from Tibet, whether the train is up driving or down driving, the scenery during section from Lhasa to Xi’ning is alike. The quantity of Tibetan sheep is random. If you are lucky enough to purchase the train ticket to Tibet, the train set for Tibet can give you more amazing and joyful experience whereas it is more plain on the way back from Tibet.

Qinghai-Tibet railway is a scenic avenue which is a must try for you if you travel to Tibet. You can appreciate the endless grasslands and snow mountains. Also you can see Tibetan sheep near and far and Bos grunniens mutus living carefreely and feeding in the vast plateau. It is recommended to you to experience the Qinghai-Tibet train if you plan to travel to Tibet. 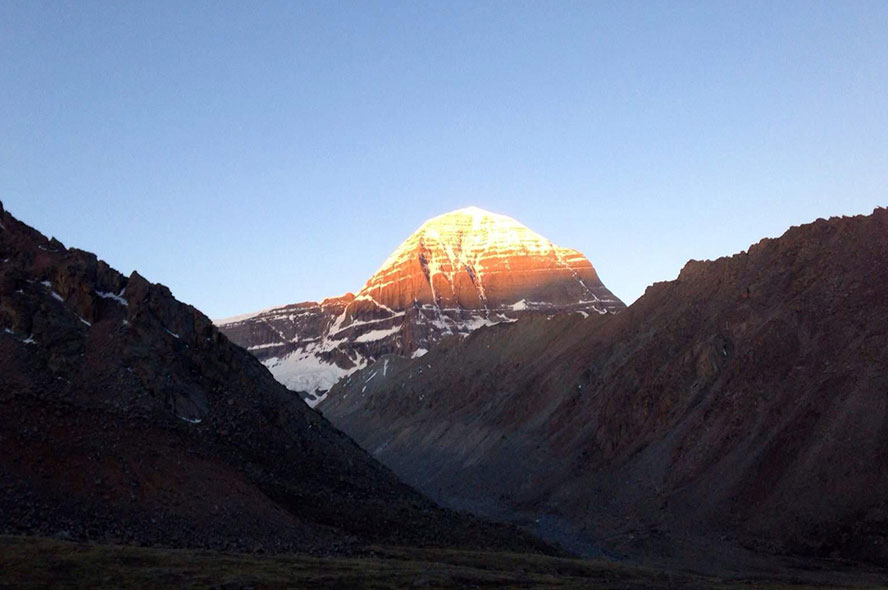 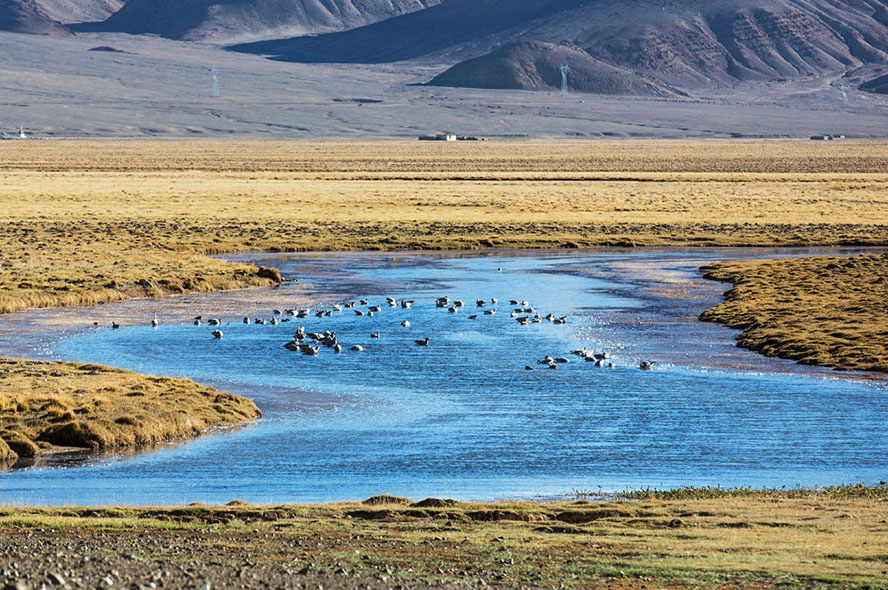